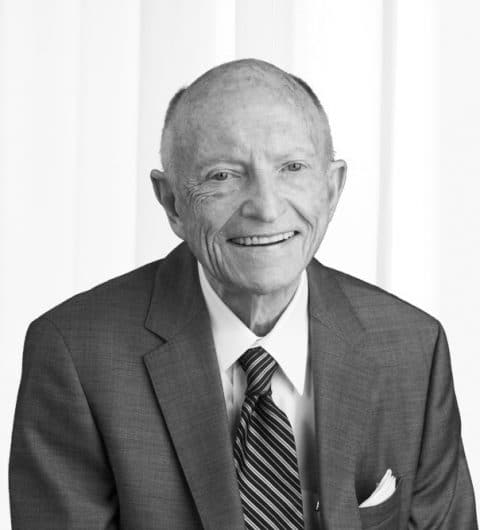 It is with great regret and fond remembrance that Mithoff Law announces that William “Bill” Jackson Stradley passed away peacefully at home on April 9, 2020, surrounded by his family. Bill was born in Houston, Texas on October 27, 1939 to Samuel Hoge Stradley and Mary Elizabeth “Libby” Mitchell Stradley. He was an only child raised in the Montrose area of Houston and attended Montrose Elementary, Lanier Jr. High School, and Lamar High School (from which he graduated in 1958). Bill began college at the University of Texas in Austin, where he met Emmalee, who would become his wife. Bill then transferred to the University of Houston, from which he earned his Bachelor of Science degree in 1965. He then earned his law degree from the University of Houston Bates College of Law in 1967.

Bill and Emmalee were married in 1960 and were soon to celebrate their sixtieth wedding anniversary. She survives him. Bill also is survived by their daughter Lisa Stradley Bergez (and her husband Craig) and their son William “Bill” Mitchell Stradley (and his wife Stephanie), as well as their five grandchildren, Katherine (and fiancé Alex Cohn), Emmalee (and fiancé William Holt), Barrett Bergez, and Jackson and Jessica Stradley. Bill’s greatest pleasures in life were times spent with his family.

Bill practiced law for nearly 50 years and was known for his integrity, compassion, and humility. He spent his entire career as a personal injury trial lawyer, proudly seeking to help injured Texans obtain just compensation for their suffering. He started his career at the predecessor to the law firm Jamail & Gano, spent many rewarding years at his law firm, Stradley, Barnett & Stein, and then finished his career at Mithoff Law, where he was a valued member of the firm for more than two decades.  Bill was Board Certified in both Personal Injury Trial Law and Civil Trial Law by the Texas Board of Legal Specialization.

He was a President and Director of the Houston Trial Lawyers Association, a President of the Houston chapter of the American Board of Trial Advocates, and a Director and Director Emeritus of the Texas Trial Lawyers Association. He also served on many bar association committees, including the Houston Bar Association Committee on Professionalism and the State Bar of Texas Committee on Texas Federal Judiciary Appointments, as well as an appointment to the Supreme Court of Texas Professional Ethics Committee. He enjoyed mentoring other lawyers, and in the 1980s, he served on the advocacy faculty for both the University of Houston Law Center and the South Texas College of Law.

Bill’s community involvement included serving for many years (including as President) on the City of Houston’s Mayor’s Police Advisory Committee during the administrations of Mayors Jim McConn and Kathy Whitmire, as a Director of the Houston Council on Human Relations, and on the Administrative Board of St. Luke’s United Methodist Church (alongside his friend Rev. James H. Ellison).

Bill was a true gentleman and an all-around great guy. He served as a mentor and dear friend to the attorneys and staff at Mithoff Law, and had a positive influence on the lives of many both inside and out of the legal profession. Bill probably forgot more about the law than many of us will ever know. He shared that knowledge and experience with his coworkers and friends selflessly, used it to the benefit of his clients whenever he could, and was a true pleasure to know. An afternoon’s conversation with Bill could range over many areas—from ethics and morality, to politics, to history, and all points between. His contributions to our profession, and the daily life of our firm will be sorely missed, but we will always treasure his memory.

Bill Stradley was everything a great lawyer should be. He was devoted to his clients, faithful to his colleagues, respectful to the court, opposing counsel and witnesses, and above all, adhered strictly, in word and in deed, to the oath we swear to uphold. He was my dear friend; we will miss him greatly.”

“I had the unique privilege to have had cases both with and against Bill. Early in my days as a defense attorney, and on the other side of him, Bill taught me that professionalism and kindness are not inconsistent with zealous advocacy. Bill was an amazing winner, always treating his opposing counsel as a true colleague with humanity and understanding. I was then able to work with Bill while I was with Mithoff Law; having the amazing privilege to try a case beside him. Bill’s uncanny instincts, his wit and knowledge of the law made trying a case with Bill one of the true highlights of my career.  Always the gentlemen and GQ model of fashion, Bill was one of a kind. He was my friend and will truly be missed.”

“Bill was one of our best—-good lawyer, compassionate human, great personality and a really great guy! Our profession has lost one of our sterling roll models and we too have lost a great friend! May he rest in peace.”

“I have practiced law for 58 years, 7 months, and 11 days. Bill and I started our respective personal injury trial law practices in Houston about the same time. We became good friends. Words cannot express how enjoyable it was to have had the privilege to work with him at Mithoff Law on numerous plant explosion cases.  His vast knowledge of the law, together with the highest of ethical standards, made his advice invaluable. He was truly a lawyer’s lawyer. I will miss his smiling face. He was a good guy and a lot fun to be around.”

“He was a good man and excellent trial lawyer who helped countless folks over the years. I know that you and your team, and our legal community, will miss him as a friend and colleague after so many eventful years of contribution and commitment.”

“He was a good lawyer, very professional, and a fine person.”

“He was a great lawyer and good man.”

“Bill was a gentleman and a fine lawyer. Such a kind person. May his memory be a blessing.”

“Bill was a mentor to me as I was getting started in this profession. I will always treasure the conversations I had with Bill over the years. You could learn a tremendous amount, about the law and life in general, just from listening to Bill. You will be missed, and fondly remembered.”

“Bill was the most gracious, honorable, and considerate person that I have had the honor to know and work with.  Everyone who knew him loved him.”

“I had the pleasure to have known Bill for over 20 years while working with him at Mithoff Law. He was the kindest man I have ever known. A true gentleman in every sense of the word. I also had the honor to try several cases with Bill. His skill, intuition and calm demeanor in the courtroom was truly amazing. I will miss his smile, quick wit and dapper dress.  He has left an amazing legacy that will never be forgotten.”

“Bill was such a great person to know. He had a smile that lit up a room. He would always come by and visit at my desk just to say hello and talk about his family, life and those stories. I will truly miss him. We all would run up and assist him whenever he entered the office, because he was just a big part of our family. He will be truly missed.  I am so glad that I had the honor to know him.”

“A quote I read today: ‘The Greatness of a man is not in how much wealth he acquires but in his Integrity and his ability to affect those around him positively.’  I’ve never felt anything but love admiration and positivity when Bill would come into the office. Rest in Peace Mr. Stradley you will be greatly missed!”

“I only knew him for a short time but his quick wit and ever present smile will be missed. I mentioned to Mr. Stradley once that my wife said his gentle demeanor was reminiscent of her grandfather, he then asked me to tell her that he was honored to be held in such high esteem. In truth it was our honor to have known him.”

“Mr. Stradley was a true gentleman with the kindest of souls. It was a privilege to have known him. As far as being a dapper dresser, I loved his seersucker suit in the summertime and his ever-present smile.”

Man hurt on job gets settlement

A Sense of Empathy: Noted Personal Injury Attorney is Representing Harris County in its Case Against Volkswagen

Texas City Refinery To Pay Millions To Families In Blast